The Battle of Westerplatte and the destruction of Danzig, marked the start of the Second World War in Europe on 1st September 1939. This tour visits the city, accompanied by local historians which is then followed by visits to the new WWII museum in Gdansk and a trip to Warsaw covering the Warsaw Uprising – including a visit to the Museum of the Warsaw Uprising. There is also a trip to see Treblinka Death camp. 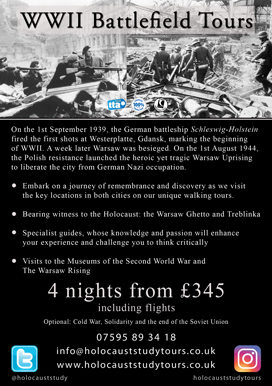 See our A5 WW2 flyer

Our tour takes us to the city of beginnings: the beginning of the II World War and, exactly 50 years later, the beginning of the end of European communism. The Teutonic Knights, Poles, Germans, Prussians, Swedes and even Napoleon have fought for the right to declare Gdansk (Danzig in German) their own.

The birthplace of two famous scholars and one movement that forever changed the face of the world: Daniel Fahrenheit, Arthur Schopenhauer and the Solidarity movement.

After WWI the Treaty of Versailles granted Danzig ‘free city’ status. Poland however maintained a military post at Westerplatte and a Postal service – its building being extraterritorial Polish property.  However, with a German majority, Hitler used the issue of the status of the city as a pretext for attacking Poland.

On the 1st of September 1939, the German battleship Schleswig-Holstein fired the first shots at Westerplatte, marking the beginning of World War II.

Gdansk became the main shipyard for the production of the German submarines, the U-Boats, with Poles used as slave labour.  When the Red Army arrived in March 1945, the city was all but destroyed in the ensuing battle.

Our tour takes us through the German invasion of 1939, the establishment of the ghetto and the Warsaw Uprising. We utilise witness testimonies to learn more of the civil and military resistance, the horror of life in the ghetto, Polish soldiers on the Western and Eastern fronts of the War, and everyday life in the occupied city.

Phoenix from the ashes – a description often used about the city of Warsaw.
German bombs began falling on the 1st of September 1939. A week later Warsaw was besieged; despite brave resistance, Warsaw fell within a month. The Nazis terrorised the local population with arrests, executions and deportations, and the establishment of a Jewish ghetto.

The city’s residents rebelled twice against the occupiers twice: first in April 1943, followed by the general Warsaw Uprising in August 1944. Both revolts were brutally crushed.

Only 15% of the city was left standing following Hitler’s order to raze the city after the ’44 uprising.  At the end of the war the city lay in ruins and 800,000 people (more than half the pre-war population) had perished.

Our tours can be tailored specific to your curriculum requirements; learning outcomes can be mapped to fit AQA, EDEXCEL and OCR GCSE and A-level syllabuses in Philosophy and Ethics, Religious Studies and History. Our educators and guides are recognised internationally as some of the best in their respective fields.